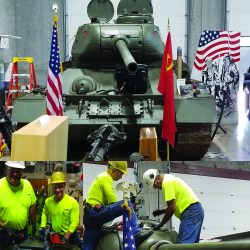 In 1990, Bob Costa from Egg Harbor, Wisconsin, reached out to the Russian government and asked if it would donate a Russian tank as a “great gesture of goodwill” to a small-town military museum in Wisconsin. The Russian T-34 Tank (85mm bore) arrived one year later fully refurbished with tools, spare parts, uniforms and documentation about its importance in history. Manufactured in May 1945 during WWII, the tank was deployed to Mongolia to fight the Japanese. The tank sustained at least two hits that left marks on the hull of the armour.

The United States government requested that the cannon barrel and breach on the tank be modified so it would never fire again. CR Meyer donated labor and drilling materials to machine a 3″ diameter hole into the breach and barrel making it unusable.

The tank can be seen on display at the Military Veterans Museum, Oshkosh, WI.